As I had hoped, without tweaking, the patch and the Makey Makey worked perfectly! So I moved on to create a stand that would make the project look a little more professional. I used cardboard and tape to make a stand and then painted it. I also built a little stand with the title “Nail Polish History” painted on it. After I let the paint dry, I conducted a few tests to ensure I didn’t undo a connection and took it upstairs to present at the interactive exhibit showcase. I reconnected everything and tested it again, just to be sure. 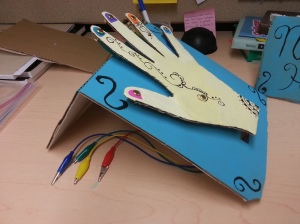 What I wanted to do:

What I ended up doing:

However, this idea proved too difficult in a short amount of time. The nail polish colour matching was far too complicated and therefore I ‘spectacularly failed’ that portion of the project. I did succeed in what I ended up creating. I decided to use the Makey Makey and connect with Max 6. Using the Makey Makey allowed me to still use the nail polish theme, but in a different yet fun way! I used brass fasteners as my conductive element. I strategically placed them where you would press if you were pressing a button on a controller that looked like a hand and placed another fastener at the base of the hand where your palm would normally sit. The fastener at the base acted as the ground for the Makey Makey. Using a patch my professor provided me, I added my content and added one more option in the patch for users to choose on the hand. It wasn’t as tricky as I had once assumed, thank goodness. I then used the help functions within Max 6 to figure out how to effectively use presentation mode. I succeeded and was able to present my project without any hitches to the class and the various guests.

My project was well received by the class and guests. It was nice to see that even people who have much more experience in the field than I do, were impressed and interested in what I had achieved. I made sure to explain what I wanted to do originally and why I had to change it to the patrons. Below are some photos from the event: 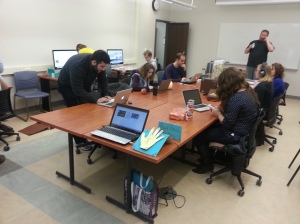 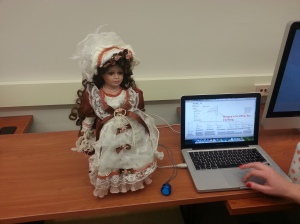 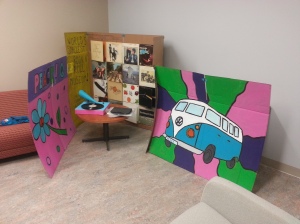 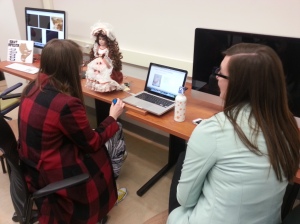 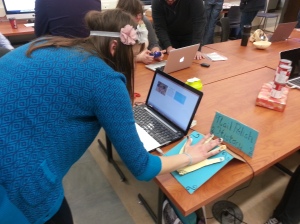 What I would have liked to have done differently:

I would have preferred that each video and photo show up on the screen by themselves. In the few minutes before our digital project showcase I didn’t have the time to fiddle with the patch in order to make this happen. But with some time and additions to the code, I probably could have made that happen.

I also would have preferred that my videos were a larger size and that they stopped playing when another part of the patch was triggered. The video size could have been remedied by changing the quality of the original saved video. The reason I chose mobile versions of the videos to begin with, was to ensure that I would not overload my computer and the software. I wanted to keep everything as simple as possible.

I would have liked to do more in-depth research into the history of nail polish and nail art. There is so much more to the art than what people think, so I believe it could be expanded on quite nicely. In particular I would have liked to delve into the history behind nail art as a business. I think it is fascinating that the nail art business is thriving and I want to know when it started and why. I would also like to know more about how the esthetician serves as a therapist in some cases.  Patrons tell them things they would not share with those close to them and I would like to know how that role is mentioned or not mentioned in school before the esthetician goes out into the workplace.

I now know that I CAN complete a digital exhibit and not completely fail! I also learned there is always so much more you can be doing and always someone that is going to be capable of so much more than you. You have to keep this in perspective because you know what you are capable of, and know that you are not as technically capable as other people may be. I really enjoyed taking on a project like this, even if I didn’t seem like I was enjoying it at the time. I am glad I had the opportunity to, in Ms. Frizzle’s famous words: “take chances, make mistakes and get messy!” 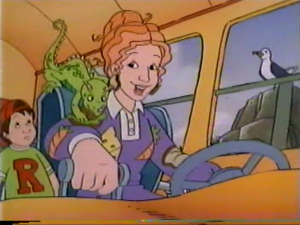 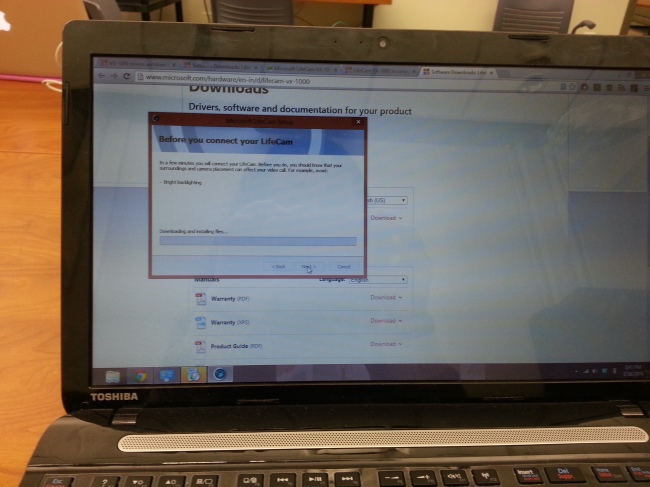 This morning I began to worry that my webcam would not be compatible with Windows 8. Which technically it isn’t. But after some discussion with classmates and the professor and few google searches, I found the driver for Windows 7 and my VX-1000 webcam. Even though I am running Windows 8, the driver still works and just warns that some capabilities will not be enabled. So far, so good! Yay! Thumbs up!

What is the main part of my project? NAIL POLISH! I left the room and painted three of my nails with different colours to test under the webcam.

Next I decided that Macgyvering a webcam stand would be the best option for finding the correct height for the video. Using my water bottle and the webcam box I found the perfect height to get both my nails and most of my hand focused on the screen.

After I set it up, I filmed a short video to track the colours of the nail polish so that my professor can help me figure out a patch for Max 6.

What are the next steps?

– testing the patch with everything connected

Hopefully everything continues smoothly… and I succeed moderately.